Bring Your Own Gown……

This is probably a TMI moment, but I haven’t had that “girly appt” since my last son.  That would make it nearly 11 years – I’m a little out of practice.  When you sit there, after this much time, things go through your head.  Not the least is why they can’t afford the bottom half of the paper “gown”?

I’ve been babied, I admit it.  All my former appointments were with the midwife for the boys, so I got the nice, soft, long fabric gowns with a little, warm sheet to boot.  So when they placed the paper on the table next to the piddle pad and said “Suit up”, I was a bit confused?  Adding to my confusion was the fact that when I attempted to place the paper on my shoulders and couldn’t find the remaining 3/4?

The doctor coming in and smirking at the fact that I am now wearing my sweater around my waist and the paper “gown” on backwards so the opening is down my back, was less than encouraging.  As she’s explaining how I’m actually supposed to be wearing this glorified dental bib, I’m thinking “Why even bother with it then?”  Front open, no bottom?  It’s like paying to be the stripper in a horribly lit strip joint – only instead of money in your strap it’s pokey things in nether regions.  Do I know how to party or what!

As they tell me to scoot down, I make an attempt at grace while doing the “Scoot… scoot… further… further… ” game.  Not realizing they had removed the center slide-out board between the stirrups as I tried to put my right foot down to balance myself off of my long ago-broken tail bone, causes me to nearly launch forward off the table, with the left foot still being held up.  As both the doctor and nurse watch in horror before I catch myself and then fling back – literally in all my glory.

As I’m laying there, trying to redeem myself, hearing her tell me “This might cramp a bit.”  I’m wondering why they don’t decorate the ceiling?  You know, pictures of rubber duckies, boats, a nice landscape scene maybe…. or maybe a nice, half-neked sailor-man, all built up and nice looking!  Heeheehee – just a thought… oooh cramp!

As she informs me she’s done and I can (attempt to) sit back up, I make my best effort not to feel violated by this stranger and her sidekick who’ve both seen more of me and my acrobatics than my dentist man in the last year.

After all this, they inform me that the blood tests that were scheduled (and the real reason I was there) can’t be performed because no one called to let me know not to have those two sips of coffee I had in the morning on the way out the door.  Oh joy – I get to come back….

The saddest part of this whole thing, is that I did my hair, shaved, picked an outfit – and had the appointment not been at 11 am, might have had a drink before hand, as this is the closest to any form of a date that I’m going to get for months to come.

Next time I’m bringing my own gown –

– it could possibly have glitter involved.

…. maybe not in that order.

As I was sitting and knitting a gift at my youngest’s soccer practice, I was talking with one of the other mothers and mentioned “Wow this has been a REALLY long week!”  She looked at me strangely and that’s when I realized it was only Monday – never a good sign!

While the rest of the week flew by in a flurry of loan signing for the work that needs to be done on “that house” and getting the contractor started from 3500 miles away.  Friday seemed to sneak up on me in a rather rude way with my dentist man making some new decisions for our future and the old lady dog getting a bladder infection and leaving me wet presents all over the house.  I love my carpet cleaner!!

Through the week I finished up several projects and started a few new ones.  My second born’s “Broken Arm Blanket” is mostly finished.  All I need to do is sew in the tails, but I’m reserving that for the last appointment.  I had the first row started the night I got the call.  Knitted it through every surgery and appointment.  It’s WAY to big, but the boys love it, it looks great and it’s actually pretty soft for acrylic. 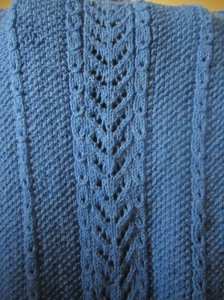 Granny’s scarf; not only is this scarf in pink (bleck), but it was the first time I had worked in lace….. i officially hate lace now.  But it does look pretty, and that’s all that matters right?  *Never mind the bruises on my forehead from smacking it into the desk in frustration*

I also finished my MIL’s scarf.  I’m not as pleased with this merely for the fact that when I soaked it, most of the yellow came out making it less green and more grey.  She loves green and that was the point of the scarf!  But she’ll love the silk anyway – she’s good like that.  It did turn out nicely though.  (Is it just me, or does the pattern in the main part look like a super hero mask?)

Something a bit festive – it should be done in time for next Christmas!

I also have another large knitted gift in the works – but those folks read my blog and I don’t want them seeing it before they get it…. which will most likely be after Christmas, as usual.  I’ll post that gift after it’s sent to them!  *grin*

I also started the churches Christmas costumes this week.  This year I have help sewing them though, so hopefully I’m still sane by the time Christmas actually comes around.  I’ve already threatened the set/costume director that I’d get “stabby” if she kept adding costumes on this year – good thing she knows I like her and only get “stabby” with people who don’t bring me coffee!

On my third attempt to send of my dentist man’s gifts… I’ll be attempting again on Monday.  So not my week!

As for our rapidly approaching new future, I’ll be praying more on that.  My heart isn’t truly happy with how it’s coming out, but sometimes my heart lies and my head has to give it a good beating. 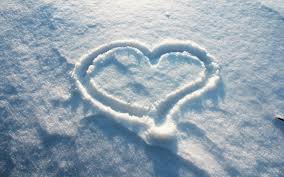 (Get it… heart… beating… snicker)