I’ve been called a helicopter parent before, which is fine.  People have called me worse.  But the same person, after watching me parent longer, took that back.  I, like most parents, will bend over backwards to help their children succeed but like most, also recognize that at a certain point, they have to do it on their own.

It’s all about background support – when what you really want to do is make it all go away.

This week, as I sat in our hotel room listening to the stupid roosters 10 feet outside our new hotels window crow at 10 pm (after starting at 5 am)….. and telling the boys to quiet down so their dad could sleep for work tomorrow.  Several hours away from him, my first-born informed me over FB that two days ago he walked into a Wasps nest and was stung all over his legs and abdomen.  “OMG’sh!  Are you ok?”  “Yeah.  I itch though.”   And then today he came on to tell me that he lost the new job he had recently gotten due to a misunderstanding.  He didn’t say it was their fault, he said it was his.  His boss has a very thick English accent and he didn’t understand her instructions for his work schedule, didn’t confirm what he heard and didn’t show up.  He’s never lost a job before?

He know’s he screwed up.  He feels terrible, especially since he loved that job.

As a parent, all I want to do is fix it!  I want to go down and explain, fight to get the job back or in the least, buy him ice cream and give him a big hug.

I sat and let him vent.  As we talked it through, I got to see him take a major step forward.  He see’s the Lords work in this.  He understands it’s a door closing to make the transition easier for the next door to open.  He grouched and kicked himself, but he moved on and got ready for the next plan.

We’re here man – if you really need us.  But go ahead and screw up.  Make mistakes now.  Fall.  From over here, I’m seeing one step back, two steps forward.  And at 18, now is the time to make those mistakes and learn from them.  What a great future ahead of you, when you understand and accept you’re own mistakes and use those to grow on!

By the time our conversation was over, he was ready to apply to a few new places.  To focus more on his new young adults ministry he is helping to start and lead at his church.  And to work twice as hard at his first job.

As for his welts – his girlfriends parents are both in the medical field and were able to take *excellent* care of him in my absence.  Have I mentioned how much I like his girlfriend and her family?

He’s ready to move on, even if his foot is still kicking his sore and cortisone covered backside a bit ~

All without any helicopter rescues.

One would think that sitting in a hotel for a week…. or two, doing nothing would be wonderful.  No worries, no cleaning, no anything.  The “no anything” is where the hitch is coming in.

While we’re sitting here waiting for our home loan to come through after our last company bailed a month and a half into the process with an “Oops – we shouldn’t have offered you a loan.  Sorry you have nowhere to go now.”  Another company came in behind and said “Sure, we could do that, just give us time.”  So here we sit.  My dentist man getting to escape to work for 6-8 hours a day and the boys and I sit here.  Pool time is a good distraction for the boys and when we have the van, we try to find free parks, walks and events.

So we don’t break the bank we’re eating in as much as possible, but it get’s comical with no fridge or microwave.  The boys are taking it all in stride however and are calling this a “vacation”.  Do we know how to party or what!

In the end though, I am truly feeling lucky.  We are able to afford the hotels.  We are still able to feed ourselves, even if it’s P.B. & J’s, Top Ramen and the second-born’s gluten-free soups (yes we bought a box of 72).  Three months of free storage from the mil.  We have furniture again after a month of sitting on the floor.  We have a job.  And we’re together, which after the past two years is something to truly be excited for.  Although, after two weeks with all five of us in one room, that may change. 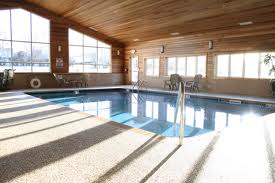