I don’t know about everyone out there, but over here, it’s flipping hot!  I didn’t move to Arizona for a reason.  I like summer, I don’t like Hades.  Right now, we’re teetering on Hades.  Over 100* for three weeks keeps me cooped up inside the house for far too long.  And the bag of  – curds I threw at my husband last night may be a good indication I need out of the house longer than to just water my plants.  And for those of you who live in hotter than that climates… my hat’s off to you.  I want back outside!

I’m still working on the house here.  I think it will be a looooong process, since the money we were going to use for it went to cover “that house”.  A “small” loss, in the mid five-figure range that the state has said is part of doing business with them.  The so-called “can’t lose any money” they touted on their paperwork turned out to be not so true.  Noted.  Don’t do business with the government.  Ever.  *cough* still waiting on military pay too!!

But the repairs are all done with and the insurance company is now slowly doing their part for the water damage.  No worries – it’s not like we need that money or anything?

Camera’s are up – and are awesome!  I love being able to see what’s going on over there.

Now – new renters.  Not sure if that’s said with excitement or dread?

Our “Spare” cat is no longer spare.  Our 20-year-old cat, that we had for 18, developed a fast growing tumor in her mouth.  (I’ll spare you the picture.)  Not wanting her hurting any longer than she had to, we opted to quickly put her down.  There is a good reason she lived for so long – she was one ornery cat!  She has taken two trips through the dryer (one of those for almost an hour – thank goodness for cloth diapers!), had her tail slammed in a car door.  Was lost in a drug store for a week, the ceiling, and the crawl space.  She survived four boys, four dogs and a new cat 15 years her younger that she could still take down a few pegs.  She’s seen more states than most people can name.  It took 2 vet techs and a vet to get the IV in and two of the heart stopping shots to get her to go down.  And I was with her to the very last.

(And if you’re keeping track, that’s 4 pets, in 3 years.  The others are starting to get nervous.)

Can’t you tell? That’s the look of fear right there. Three very stressed out pets.

But not one to sit around too much thinking about what I can’t fix.  I opted to take down a few things and to stitch up a few things instead.  Four babies in one week makes for a busy sewing schedule!  I also finally picked out the last thing for the house – the bathroom tile!  Well, that’s not entirely true.  I’m having a hard time with the ceiling paint.  Did you know that when you paint the ceiling the color is different from on the wall?  And… why can’t I find light tan paint? 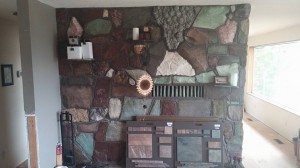 The slate matches perfectly with the fireplace – what we’re decorating around. If you can’t change it, use it! 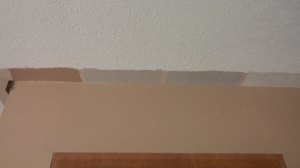 The paint on the far left is the same as on the wall?

This is how I know my dentist man loves me. He comes home from his two-week tour to this and says nothing.

No, these aren’t the hardest decisions in my life, these are just the minor distractions from the infuriating ones.  Let’s see what excitement the second month of summer brings!