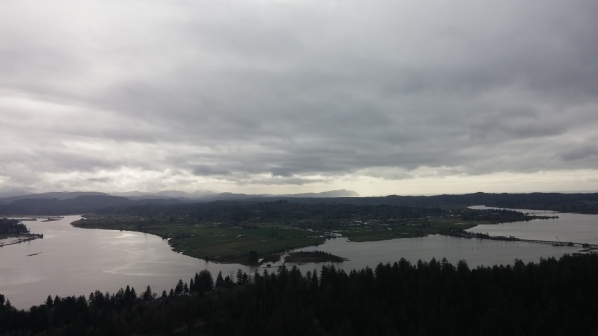 The second-born’s surgery was Friday, along with numerous doctors appt’s before hand, for his broken wrist.  Surgery went well, he now looks like he lost a war with a nail gun however.

I’m taking a little time between pain killer dosages, escorted bathroom trips and ice pack delivery to show my latest completed project.  I’m very excited over this one too!

This is just about what we started with, minus a few opaque panels that we may, or may not have accidentally broken in various ways.

Only one light worked consistently, one on occasion, and one never worked.  And yes, we tried changing out the bulbs.  And the final nail in the coffin for these lighting fixtures – they started humming.  Very, very loudly.  If they’re going to make that much noise, they had better at least work!

We took down the lovely trim, and the lights, and I nearly lost a finger on that last one to the right.  They were all connected to the same wire, so the wiring was pretty easy.

We were still left with a giant 80’s hole in our ceiling, so we took several months  to figure out what we wanted to do with it. 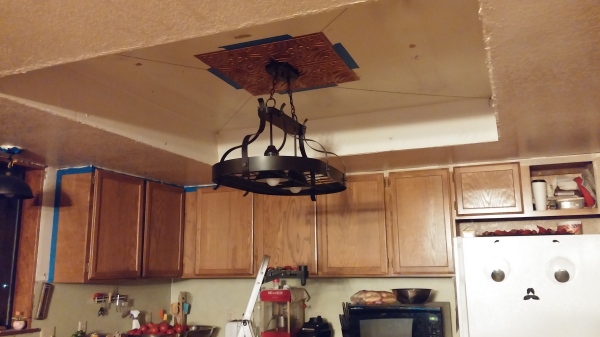 We finally decided to go with just one light down the middle, that will eventually hang over a very small island.  It’s on an adjustable light switch and is extremely bright, so no other light is really necessary – save the lights we’ll be putting in over the stove where we cast a shadow from this one.  And a faux copper tile, that will also eventually match the sink.  If we were going to be stuck with this space, we thought we’d at least make it look like it was there on purpose!

These tiles are super easy to put up, and they come in a ton of colors and styles.  We actually took a few months to pick out the exact color/design combo we wanted.  They also carry the real stuff too if you’re feeling rich.

During measuring, we discovered that one side of the inset was about 2″ wider, than the bottom.  This is how we solved the issue.  I doubt it’s what a builder would do, but since it’s going behind very light panels, and then being nailed from the trim, I’m thinking it’ll be perfect for the next 30 years or so when someone updates again.

(Quite looking in my cabinets!)

This project has definitely taken me the longest.  I was scared silly thinking about cutting the trim.  I had to learn to do something called “coping“, where you cut the backside of the trim so that it matches perfectly when it butts up against the other trim.

I finally worked up the nerve to cut it and…. there were a few mistakes, but you really have to work to see them.

I have to say, I’m uber proud of how this turned out.  I love the way it looks and am very thankful it’s over with.  You may not personally like the color or style, but it may just give you an idea what you could do with an eyesore of a ceiling in that one room you’ve been avoiding.

I have been working on the cabinets also (hence, no doors in the picture), which feels like it’s taking forever also with all the other stuff going on right now.  But if I take it as slowly as this, they should look fantastic too!

I’m off to strip (cabinets), medicate (broken children), and have a drink or two (of something in the hot chocolate range).

It’s been a long few weeks.

Someone… may, or may not have given themselves a concussion by smacking their head into the ceiling while taking cabinet doors down in the kitchen.  That same someone has also decided that really isn’t fun, and will be avoiding that in the future.

Once that drama was over, the second-born decided to do a repeat of his first summer camp, and broke his wrist at winter camp.  And this one too, will require surgery.  While I attempt to get records from one side of the state to the other, I’ll be picking out what I’ll be working on for my “Broken Wrist Project” to work on through all the appointments, surgeries and chaos.  For his last break, I made a *huge* blanket.  I’ll be scaling it down a bit this time I think? 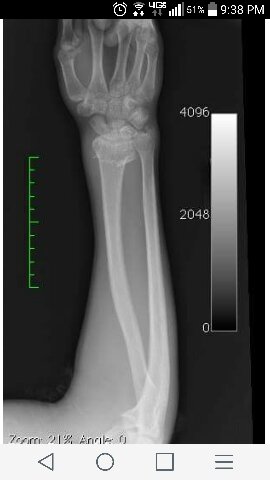 While his brothers were at camp, and we were all by ourselves, I realized that our fourth-born had been wearing the same shirt, for several days.  I know… ew.  How did I not notice this before?

Why?  Because he only wears red, short sleeved shirts.  That’s it.  Well, ok, pants too, but for his top, it’s always a red shirt, with a red sweatshirt.  It wasn’t until I noticed a stain that had been there a few days before that I realized how long he’d been wearing it.  When asked why he didn’t change he said “My clothes were all dirty.”  *sigh*  Apparently he’s never heard of a wash machine?

We went through his room and collected all of his clothes and frankly, it was time for some new shirts anyways.  We finished getting ready for church that morning and I realized that his sweatshirt was just as… um… gross.  Yup, definitely time for some new tops.

And this is when the battle began.  I told him it may be time at 14 (as of next week), that he wear more than just a red shirt every day.  A short sleeved, red shirt, to be exact.  He may have to branch out to a different color, or even a long sleeve.

He held his ground on this one, and was adamant that this wasn’t going to change.

I had a choice I could make here.  In my still healing brain, and while I’m attempting to make doctors appointments and plumbing appointments (the pipes froze and burst in “that house” the same day as the broken arm) I could also argue with my youngest every day about putting on shirts he hates.  Or, I could just buy him all red shirts, and make sure he puts on a new one every time, and we both win.

Was this battle really worth it?  I mean the guy who runs Facebook wears the same exact outfit every day of his life and he makes like…. a gazillion dollars right?  So is this really where I want to make my stand?  Over red shirts?  I could be dealing with drugs, a freaky girlfriend, bad grades, a foul mouth.  Nope, my kid wants to wear red, short sleeved shirts every day.

And gosh darn-it, I’m going to let him.

We went to the craft store where they were having a big ol’ sale and bought him eight red t-shirts for $1.50 each.  One for each day of the week, and two for Sunday, so we’d have one for him to wear while we were washing the others.  I put the day of the week on the tag so we could make sure it’s a new one each day.

We went to the clothing store, and bought him one new red sweatshirt so we could wash one, wear one, and then trade the next week.

Some people may be rolling their eyes thinking I gave in.

I just knew when to pick by battles and save my energy for the big stuff.

….. I wonder if I could sneak a Star Trek logo on all of them?  Bwahaha!

I promised I’d start to show some of my home improvement projects, and slowly but surely I’ve started getting a few pictures of the before’s before I managed to finish them.  One of the ongoing projects is replacing the electrical outlet and light switch covers and updating a few of them at the same time.

One of the big perks to this project is that I can do this while the boys are doing their schoolwork since it doesn’t make much noise, and I can still be in the room with them to help.  Can’t say that about the air compressor!

After doing a little research, I saw no reason why I couldn’t just spray paint them!  Safely of course!

And so I began my very slow process of spray painting all the outlets and light switches and staining all the new face plates. 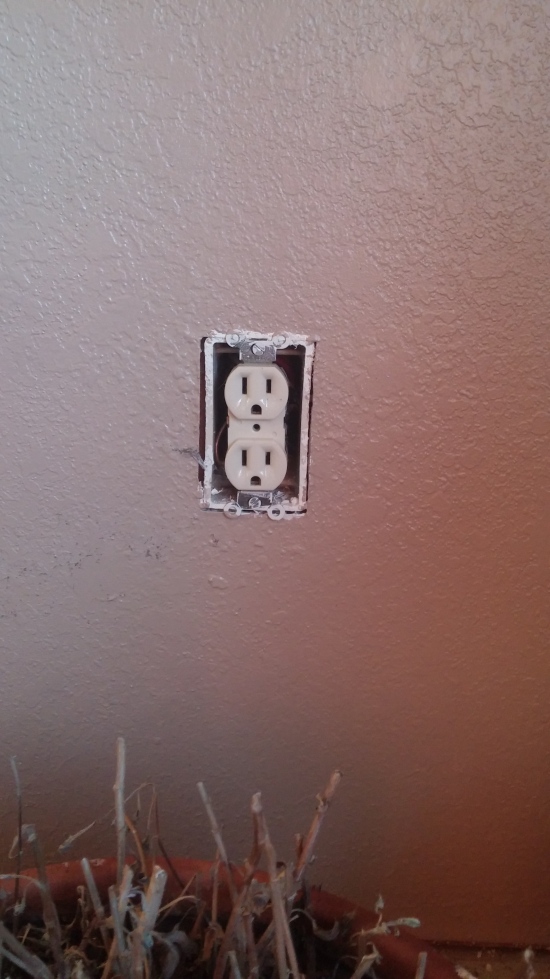 This is, of course, how the outlets and light switches started out.

After taping out a basic template for both the outlets and light switches, I would tape them down, insert Popsicle sticks just barely inside (no electrocutions here please) and begin spraying.  You can use the same cover for each new outlet or switch that needs to be sprayed.

I used a plastic spray for this, and it usually took about three coats to make it look just right.  Two coats with the “plugs” in, and one quick spray without them, but at an angle so the spray wouldn’t go into the plug-in, just get the edges.  As for the switches, you’ll have to do two with the switch up, and two with the switch down.  Just remember, light coatings or it takes for ever to dry and it’ll leave terrible looking drips.  (Notice I didn’t show you the ones I learned that on.)

The whole process usually takes about three days.  You can do more than one switch/outlet at a time by making more covers, or by removing the covers after a few minutes to use on the next one.

Also important, make the cover long enough to go down the wall to catch any drips from the spray can.  I’ve found that this company’s new spray nozzle clogs terribly and sprays wonky on occasion.  I now have a few paint touch-ups I have to go back to before I figured this out.

This is the end result.  The first two with the typical cream painted over, the next one is new fancy-schmancy dimmer switches.  I wasn’t about to paint over those at their cost! But since they were dark, I was ok with them remaining their own color. 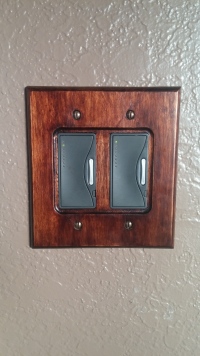 Some quick tips – let people know which ones you’ll be spraying ahead of time so they don’t blindly flick it on, and smudge the paint and paint themselves.  And do high traffic switches and outlets at night when everyone is asleep.  It will be dry by morning, and you can do the next coat the next night.

You may not like the colors I chose, but really, using the plastic spray, you can get just about any color you want to match your outlets, or walls, or your kiddo’s weirdest desire.

.So far, with savage boys using the outlets and switches constantly, dogs tails and drool strings, I’ve only had to touch up one because *I* used it too soon.  Otherwise they’re holding up beautifully!  Someday I may go through and replace them with the actual, manufacturer colored, outlets and switches.  But for now, on our very tight budget, this works perfectly.