A while ago I had mentioned that our old lady dog had gotten sick.  I wasn’t quite ready to talk about it.  Silly as it sounds, I’m more upset than I thought I would be.  I’m not one of those people who treated their dogs likes kids, but I didn’t leave them out back either (not that that’s necessarily a bad thing – my dad NEVER let his dogs in the house, but loved each one I swear more than us, they probably listened better after all!)

We’ve found out that she has a tumor.  And at 15, just the process to attempt to remove it could kill her, so we’re just enjoying her for the last few months we get her.  In all the years we’ve had her, she’s been exhausting and absolutely wonderful.  One of my constant companions, a “sister” to my oldest and here for the birth of the 3 younger boys.  She took excellent care of each one too.  She went from a dog the pound was leery about adopting out to us at 4 months old, to a dog I trusted completely with my safety and being around even my infants.  We’ve known this was coming, which makes it easier…. just still not easy. 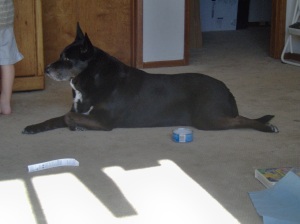 This week, we also found out that our big dog will also be leaving us soon.  She’s been diagnosed with bone cancer in her front right shoulder.  And at 4, we could remove her leg, give her chemo for $1000’s and still only get to keep her for a year.  She’s been a huge pain-in-the-butt for the whole 4 years – I admit.  But she was MY pain-in-the-butt, and 4 years is not nearly long enough to enjoy her insanity.  We have just a few months left to watch her be the absolute goofball she is. 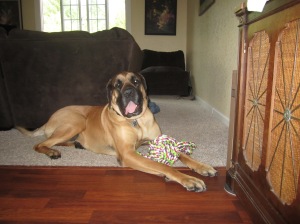 My sewing room is going to be very empty indeed and our house very stark.  I’m going to miss the fur rolling across the floor and the drool on the furniture… clothes… walls… ceiling.  And what little “girl talk” I do, will have to be done with the cat, who really dislikes it when I  disturb her universe.

I know many of you have gone through the same thing, so I know I’m not alone.

So for the next few months, my girls will get spoiled like crazy and loved like there is no tomorrow – so you know, the usual!

As for the cat – I’ve already told the vet I’m too afraid to bring her in to him. 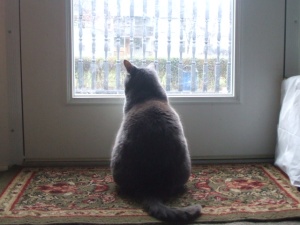 I’m sort of a late comer to getting this.  I’ve always run a tight budget and kept our spending down, but as our boys have gotten older, we’ve had to spend more – but I noticed a lot of what we were spending money on was silly stuff that I wouldn’t normally spend money on.  BK after doc appt.’s, a snack from the grocery store on a Sunday afternoon, a candy bar after soccer (notice will you…. it’s all food.  Boys eat.  And eat.  And eat…..)

I’ve always talked with them about buying sales, looking for the better price, waiting for the better deals and included them when shopping so they knew how much things really cost.  However, a few weeks ago when we were out, and the boys wanted to get something on the go and I told them we didn’t have the money for that – they were shocked!  You mean, money doesn’t magically come out of the ATM?  You mean, there isn’t endless money on the debit card?  You mean, there isn’t a money tree in our back yard?  Yes boys – the sad, sad truth is that there is a limit to mom and dad’s money!

Ok, I’ll give you that the oldest gets this now.  He makes his own money and knows that he only has a certain amount for gas and fun before his account yells at him.  But the younger three are less aware.  They get a dollar, the spend the dollar.  That’s about the end of it.

I got it!  On our weekly calendar I put up how much their weekly allowance for “fun money” was.  (They do chores, but they don’t get an allowance – it just didn’t work in our house)  This included food not made at home, snacks, movies, candy, video games they all wanted.  Anything they wanted to buy together and didn’t have the money for themselves.

They were amazed at how little there was at first.  “Really, that’s all we get?”  “Yup, spend it wisely!”  But as they started working together on what they wanted, what was important and maybe even saving some of it up for things they REALLY wanted, they started to actually enjoy it!  They realized how much was really there…. if they didn’t spend it on “stuff”.

On top of this, they decided that they wanted to spend half of what they saved up, to help pay for trick-or-treat supplies.  I was a bit taken back by this, but very proud!

So I guess my venture into teaching them budget skills is starting off well!  Now – to find that money tree? 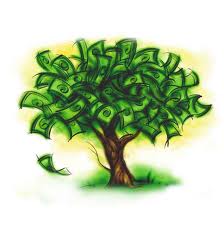 Can I just start this whole thing over?  I mean, really.  The hubby leaves and literally the whole house falls apart?  I don’t think so!

The last two weeks, I’ve been incapacitated by the dastardly flu.  Mind you – the doctor, the pharmacist and the nurses ALL asked me if I’d like the evil shot, and of course I turned them all down.  Alas – I was already a carrier, thanks to my well taught lessons on sharing, my first-born had handed off his cooties to me like a tainted bag of candy.

I started feeling it come on about a month ago, but frankly I had no time for sickness.  Surgeries, sick boys, sick dogs, failing fridges, costumes to be made, schoolwork to be started and soccer games to be played?  Nope, no illness allowed! 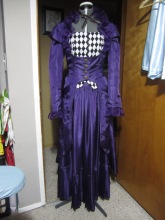 But the night I finished the costume, I felt it.  I laid my head down on my pillow and I felt a little click in my chest.  Before it was just a tightness, a warmness that was lingering… waiting.  By morning – it was like a flood of phlegm had rushed to my lungs, sinuses and throat!  The cold, the hot, the aches, the pains, the coughs, the sniffles, the sweats – NO!

I let my guard down since I had finished all my projects.  I had allowed myself to think it would pass.  To think I might rest – Silly me!

Two weeks later, after 1 half-way repaired fridge, 2 wobbly dogs, 4 sick boys, one sick mom and an untimely email from my dentist man on the great time he was having on a beautiful island off of Thailand, right as I was hoisting myself from the porcelain throne due to some very nasty flu meds…. I’m finally feeling somewhat human again. 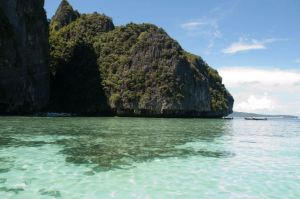 The body is at least moving.  A small crackle in my chest, a little wheezing and a few brain cells short, we can restart this whole thing all over again.

And like some sort of cosmic revenge for the untimely email earlier, there is a bug going around the ship…..