It’s been a few weeks, but I haven’t forgotten anyone.  It’s just been those kinds of weeks.

Our biggest excitement has of course been the fact that through much scrimping and saving, we were able to pay off our Sandy repair loan early.  *happydance*  I really can’t tell you how good that feels and how much it saves us paying it off early!  Not to mention helping in mentally recovering.  Just in case you’re wondering what we’ll do with our extra cash – we’ll be exciting and start paying down the loan on “that house” so we can get it the heck out of our lives!

The rest of the time we’ve been working with “Dean-a-sore” as we like to call him; one of the rescues we got in January.  The big lug could barely walk when we got him and had several physical issues due to the meth-heads inability to care for another creature properly.  His head never formed properly, his joints were in terrible condition, he was “fixed” improperly among several other problems.  None-the-less that boy was pretty awesome!

A morning greeting of chattering teeth and a high-five for breakfast and anytime we came back from somewhere.  His run (if we can call it that) when we’d take him for a walk around the property, would have made even the most staunch pucker-butt giggle.

A week ago he stopped walking all together.  We took him in to see if there was anything else we could do and did one last-ditch effort in assisting his motor skills.  The rest of the week we picked up his nearly 200 lb body and assisted him in walking and “other task” to give him a fighting chance at recovery.  Nothing.  As of Friday, after enjoying his chocolate cake, Deany-boy was put to rest after showing no progress.  He’ll have no more pain, can run with the best of them and is getting more love than even we could give him.

We’re better people for knowing the big goof!  I’m glad we were able to give him a few months of the good life.

His sister has been searching for him through the house for the last few days and whimpering when she lays on her side of their bed.  Lady has never been without another dog before, so we’ve been giving her a lot of extra attention, including her first hike today.  3 miles – she loved it!  She also barely made it to the end.  We’ll have to do this more often to get her up to the 8 mile route.

My distraction, while choking back the tears, has been something I started at the last house.

I’ve done so many different attempts at this skirt, I’m surprised it’s still in one piece?  I’ve tried sewing in a casing for an elastic or ribbon band.  I cut them in half and tried sewing them down to the underskirt.  I tried the knotting technique that’s all over the internet.  None of them looked right?  I wanted maximum *POOF*!

I sat and looked at it the other night; Tupperware cup of wine in hand, hulu in the background.  Bingo – work began!  I finally got it the way I wanted it and finished.

Tonight I finished up the underskirt (because flashing your tights-covered keester is not cool!).

…. with Lady’s assistance of course.

In the end, we’re feeling good.  A loan paid off.  A dog given a happy ending.  A project restarted.

It’s amazing what can happen in two weeks! 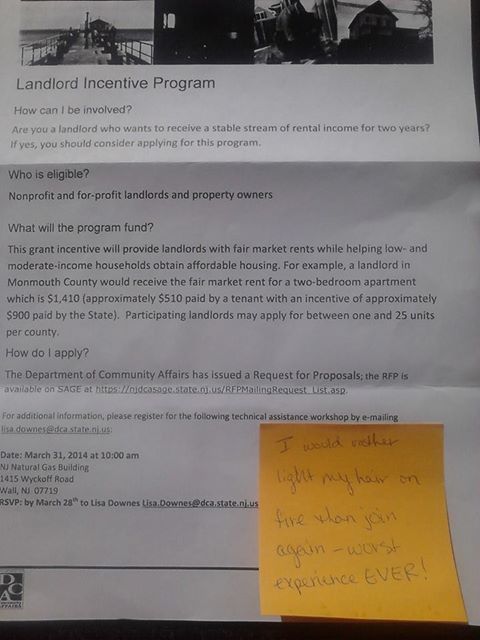 I’m not sure if the above statement is *really* true.  It’s more like…. I’d rather set it on fire, run through a gasoline factory naked, while in labor.  It would be easier, and maybe then the state would pay attention?

I know I’ve talked about “that house” before.  The house I would love to fall to the ground (while it’s empty of course).  I would add by meteorite, but then insurance wouldn’t cover it.

We had an aircraft carrier, two coastlines and several people in between hoping it would go down in Sandy, yet no.  The stupid thing lives.

After a year of no rental income, we were finally able to get renters back in – if you want to call them that.  FEMA in all their wisdom, placed people supposedly displaced by the flood into homes that were newly finished due to the flood.  We thought we were helping someone out.  Shame on me for trying to help – that’s the last time that will happen!

Since July, they have violated every line on the rental contract.  EVERY LINE!

Plus a few extra’s.

We took the long, drawn-out and costly steps to eviction after the final straw of leaving a cat to die under the house.  Last week  we were told by the judge that all the violations, on the contract they willingly signed, don’t matter because they have three kids.  It doesn’t matter that they, among all the other violations, don’t have insurance (in a flood area) to cover in their words, a dog that may bite that isn’t on the contract.  It doesn’t matter that they disturb the woman behind them with two kids of her own.  It doesn’t matter if the house falls down around them because we can’t finish our work from the flood because they won’t let workers finish.  Nope – they have three kids.

Never mind our four kids.  After all, we work.  We pay our utilities, loans, mortgages and taxes.  My husband works two jobs to make sure we can cover their needs, on top of ours.  A judge decided that their kids took precedence over our kids and the neighbors… and yours, because they’re on state aid.  Because they’re unwilling to work a real job and pay their own way, we have to cover for them.  We’re not talking, they’re trying to work and are having a hard time – nope.  I’d love to help with that!  Find me that family!!

Does that mean we get out of the contract?  No actually, it means they may get to stay in for six months longer than the contract because they told the judge they can’t find a place to live in the three months remaining.  REALLY?

Nope.  When you live on state aid, only you matter.  Not the tax payer providing your rent, the person who owns the house or anyone around you.  State and judge condoned…. and apparently encouraged.

I have a small confession…. I loathe baby showers.  I wasn’t all that excited over mine even.  I will send you all sorts of gifts if you don’t make me come!

A bunch of squealing women, touching one poor woman who’s too fat to run and hide.  Not that she’d fit anyway.  Sitting in the most uncomfortable chair in the room, everyone staring at her as she goes through each gift, hoping it’s not that ugly item she specifically passed over three times at the store.  And everyone hoping they didn’t buy that one item she specifically passed over three times in the store!

The last one I attended I won most of the games, possibly due to the fact that I was the only one who had kids already – so they stopped letting me play.  Sore losers!

I posted about the rattles I was making for a friend of ours.  After several years of waiting, they’re having a small litter.  A boy and a girl.

Having known our friend since 9th grade (we won’t go in to how many years exactly that is!) we are very excited for them!  He was one of the few who stuck around when we had our first, and was one of our witnesses when we got married.  19 years later, he’s getting two of his own.

How could I not get excited?

How could I not get even more excited when I was told “Hey, we love you, but we don’t want you driving all this way just for a shower.”  OMG’sh – I love these two!  Not to mention, I don’t know *any* of her friends.  Awkward!  So this was most excellent!

In my excitement I may have gone a little over board… maybe.  But by-golly I had a blast!

I admit that it’s orange… that wasn’t my intention I swear!  The yarn is coral and when we went back to buy the fabric – it looked like it matched perfectly?  Darn fabric store lighting!  Goes awfully well with the teal though doesn’t it?

This is just what I put in the basket – I still have a few left overs!  Anyone need baby items?

The end results were great – I was very pleased!  And much relieved when they told me how much they liked it on its arrival.  It can be a bit nerve-racking when you hand make something not requested – who knows if they’ll actually like it or think “Oh my lanta – this is the ugliest thing anyone has ever made?”.  Oh, don’t act like you’ve never gotten one of those!

I guess the lesson here is – if you want a haul from blankenmom, don’t invite her! 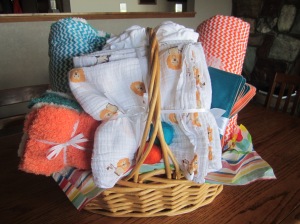 Items in the basket ~